Due to the nature of the culture in Ghana church rarely starts at the scheduled time. Anyone who has ever visited the continent will know this fact, often to their cost. This Sunday was no different for Vince speaking at the 8.am (8.30ish) service and me for the 10am service. This morning was not so late starting. It turned out that even without any collaboration on subject Vince and I preached on virtually the same thing. Vince’s tongue in cheek comment to me was “its almost a co-incidence”.

It had been a hot night, the fan in our room works well, however it makes so much noise making it difficult to sleep, so it has been switched off. Sleep comes easily due to tiredness but it is so hot and humid due to the rains, that it can mean waking in the morning hot and uncomfortable. After a shower and some breakfast of porridge with condensed milk and omelette with bread and tea we have some preparation time before church. The reason for such a delayed prep time is due to being out last night, at a village showing the “Jesus Film”, and returning very late. 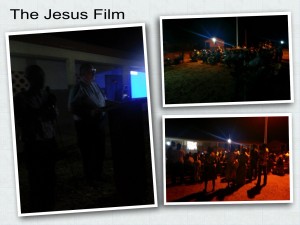 These beautifully dressed people who turned out to church this morning are a credit to the Frafra people. Even from their poverty they take such pride in their appearance and present themselves well even if in the simplest of attire. I have always said that `africans can look great in just about anything. The colours and patterns that would make us look sick make them look vibrant an joyful. All of this goes together, with their enthusiasm for the Lord and their determination to worship no matter their situation or condition, to make for a wonderful service. Singing to the beats of multiple drums and percussion instruments mixed with jumping and dancing makes for a very splendid service. One highlight is the offering. No begrudging tightly folded notes or dutiful coins here; the offering box is placed on a stand at the front of the church and this is the signal to the dancing congregation to, in single file, dace past the box on one side dropping in their offering with their right hand holding their wrist with their left hand as a mark of respect, and off round the other side of the box back into their places.

The preaching is easy in this atmosphere; the people are hungry and ready to hang on every word. Their ready appreciation when a ‘good point is powerfully made’ is enjoyed with clapping and whoops of excitement. Not a hint of any unbelief or existential angst at all, just a readiness to hear what God has to say and to discover how that works out in their lives for real.

A relaxed walk in the sun on the Saturday afternoon was followed by a ‘chance’ meeting with a local Frafra pastor who was working in a remote village and had come to visit Pastor Peter to find out if he had a copy of the Jesus Film. He said “no but…we have two visitors from Scotland who are carrying a copy and it includes the Gurenne (Frafra) language on it. They also have a projector and a simple screen and they would be willing to help out”, his excitement was evident with outbursts of ‘Its a miracle’ made the joy of helping al the more pleasing. So our Saturday evening was now organised.

The process of getting to the Jesus Film village was a real challenge. Finding a suitable vehicle, a sound system and negotiating the muddy potholed roads. After all of this we were at least two hours late in getting there, however everyone was still there and we got set up and started. About 15 minutes into the film the rain came on and we had to hurriedly dismantle everything and set it up elsewhere as the people ran for cover. Thankfully they remained and the film was shown to its mid point and since it was late we told everyone to return the following day to see the remainder of the film.

The following day (Sunday) we returned to find a growing group of people eager to see the remainder of the film, the group grew to about 1000 people, out doors in the darkness, lit up in places by flood lights and other bulbs hung around the quadrangle of a school. Where there was any form of light there were zillions of insects vying for their place in the light and the vicinity around the light, where they could not be seen were further insects trying to get to the light.

It was announced that the ‘evangelist from Mission International’ would be preaching. I was asked as we arrived at the village school if I would be happy to ‘say something’ and when I asked for how long I should speak the answer was “only 30-45 minutes”. Talk about a wing and a prayer.

People were obviously moved by the film, there was wrapped attention though out, laughing at some things, for example when the little boy steals Herod’s fine cloak that was put on Jesus as her went to the cross and which fell off on the street. This seemed to tickle their imaginations. There was rapturous applause when someone was healed or raised from the dead during the movie, but when Jesus arose greater applause than ever. They loved the ‘Greatest story ever told’.

Preaching a gospel focused message to this group of people was so enjoyable, except for the mouthfuls of insects I would inhale with every breath, since there was a light bulb only a metre from the lectern. I buttoned up my collar to the top because the insects were getting into my shirt and biting me which was very distracting to say the least. Some 90 or more people came forward at the altar call and the pastor told me that after such a successful mission a church plant would be taking place in this very remote location.

On the way home we were so tired we nodded off, even the potholes could not keep us awake; the taxi driver was laughing at us as we wobbled about in the car as we slept.