Before coming to Ghana Vince, my travelling companion and one of Mission International’s trustees, had told me of a remote village where he had preached on a previous occasion and where Pastor Peter had attempted a church plant. The ‘plant’ had been unsuccessful really because the church building, which was intended to double as a school, they had put up had fallen down and was nor reduced to a mere pile of blocks and rubble. Differing estimates on how long it would take to get there were unreliable due to the road conditions after heavy rain, however we set off to the village of Ganre (Silent N pronounced Garrey). The bus made its way along long stretches of road at walking pace and through villages with waving residents as they saw their first glimpse of the legendary Solomia (Soolomia) white people… (we felt a bit like abominable snowmen, some were intrigued by our appearance and some of the kids were scared out of their wits).

Eventually the bus came to a halt. We could drive no further, from here on in there was no road, only paths through tall crops of maize, millet and sorghum with beans, groundnuts (peanuts), tomato and potato crops as well. Although extremely stoney, this is clearly very fertile soil, and the people were clearly hard working too. “Wontenga” (good afternoon) “Naa” (I heard you [respectfully]) as we trudged along the narrow, muddy paths through traditional Frafra settlements until we came to a large Boubad tree. The base of this tree (of which type there are many, and many much bigger) was about 20 metres around, with an overhanging spread of leaf covered branches giving shade to a small group of people. While we were still a fair distance away we could hear a loud hooting sound. Pastor Peter said “that’s the alarm”. One of the boys was making a noise not unlike that of a shipyard hooter when the days work is over. Soon people began to arrive from all over. They were disappointed that they had not had further notice of our arrival, never-the-less about 100-150 people, including many children, had gathered to see the white’s. As people greeted us personally they would crouch down briery on their hunkers in respect and say a few Gurenne greetings before withdrawing. No handshakes were exchanged unless requested. 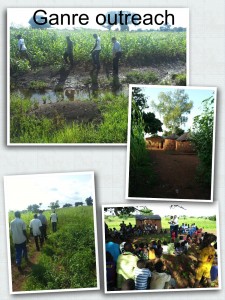 We initially took a look at the collapsed church/schoolroom building and mused over how different things might be for this community if their church had not fallen down. One old lady committed to keep the site respectable complained that people were now using the footprint of the building to plant crops, this to her was the ultimate insult. After we had preached and many had come to Christ, we discussed with the community what Mission International could do to help. To a person they all wanted a church, a school and a clinic. We encouraged them to pray since at present we do not have any funds to help them, but we did promise to try to find the funds necessary to put up a new school classroom, which could be used as a church on a Sunday and could also be used for clinics until further funding is found. The children here have to walk about 10 miles to school, yes there is a closed school, but there is a huge dam and a waste dump there and when it rains no-one can pass that way. 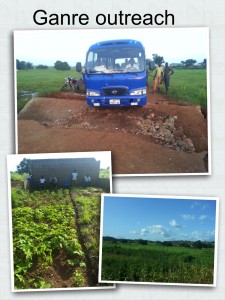 We left them concerned that we might struggle to fulfil our promises to them, however was can but try to help this remote, needy but hard working community. Our journey back was eventful too. We came to a small bridge on the road that crossed a ditch or stream. The bridge had collapsed into the ditch leaving a difficult crossing to negotiate. A few young men were there taking advantage of the stranded vehicles trying to cross. They helped us by guiding the driver over the remaining strands of bridge and once carefully over they demanded payment for their ‘help’. We coughed up 4 Ghana Cedis but they, seeing whites on the bus, decided that more could be extracted from us. A few raised voices and it was all over their payment was sufficient and we went on our way. Soon we were home and another day was almost over. Life is just so different here. The struggle to survive bring out the best and the worst in people. The fear of hunger drives hard work as well as the ability to harness less welcome skills.