You don’t have to walk far around the school compound until you feel a little hand slip into yours. The desire to be with the Solomia and to touch this strange creature can frighten some but cause others to be more friendly and sociable.

The work on laying the new cement floor in one of the classrooms was to begin today. The ‘ingredients’ had arrived in the last few days and the labourers (some of the young lads from the community who needed some extra money for school fees) were now on site as was Pastor David who had travelled with us to Ganre the other day. He has learned some building skills and does some ‘tent making’ using them to augment his pastor’s salary. As I went down to the school from the pastor’s house to see what progress was being made, I though I was all alone, however I felt a wee hand just gently grip mine and then I knew I had some friendly company. 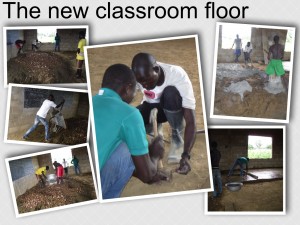 David was pegging out the floor, running twine between the pegs and using a spirit level was trying to make sure there was a point of reference for keeping the floor level across the expanse of the floor. At the same time a batch of concrete was being mixed which would form a 6 inch apron which is levelled and smoothed to form the new classroom floor. Pastor Peter said “the school kids will be sooooo excited when they meet their new floor”. The young lads worked so hard without a break, borrowing in sand, cement and fist sized stone chunks as aggregate for this mix. Water then applied and the mixing process began. Once mixed then into a wheelbarrow again and right to the spot where David and his assistant tamped and levelled the concrete into place. My intention was to give them a ‘wee hand’ of my own, however when I saw how these guys scrabbled over the sharp stones in their bare feet I thought better of it and just watched and took pictures instead.

Of course there are many here that need a wee hand. Kids in particular. Many have lost parents due to HIV/AIDS and other such tragedies, however for less that the cost of a monthly trip to McDonald’s a child could be rescued, sent to school, be given food, clothing and accommodation. Even the children of pastors need help. Pastors get paid so poorly in the main and are doing an amazing job under very hard circumstances. Their kids don’t always get school fees, or turn up to school as the ‘poor relatives’. Further to this a pastor often takes into his household children who are destitute and cares for them as his own, putting further stress on the already limited family budget. 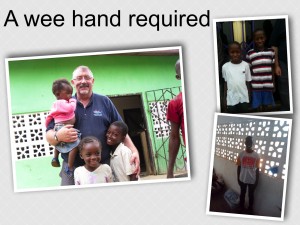