After a. Good night’s sleep we arose to shower followed by the man-quest ‘breakfast’.  The hotel we are staying in does not do food and so we went on search of a supermarket.  Woodsy (Richard) has been here on teams before and so knew there was one very close a few streets away.  It was a lovely walk in the quiet cool of the morning as shops and street vendors we getting ready for their day.  I was told to expect searingly hot temperatures but instead temperatures are similar to a nice summer day back at home.   A few motorbikes were on the road but this changes to a busy buzz later in the day since these are the cheapest way to travel. No push bike as in Africa for taxi purposes and general travel and transport and frankly not nearly so many motorbikes either as one might find in Kampala or Kigali or any other African capital. 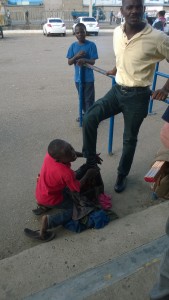 We purchased some small rolls, jam and peanut butter with plastic knives and spoons and some sweets for local kids and set off back to the hotel.   A cup of coffe was the only thing missing from this veritable feast, which sadly we never did locate.  Maybe tomorrow?

Woodsy needs a small rucksack and so he and Crawford have gone out into the street to buy one after a failed attempt by Woodsy on his own, not knowing the Spanish for rucksack I suppose is an issue that even he found insurmountable.   Muchea!! Crawford’s fluent Spanish is of great benefit to us at this side of the border in Dajabon.

Today appears much hotter than yesterday.  And the old addage that when you cross   the border in to Ouanaminthe it appears to be a few degrees hotter than in Dajabon certainly appears to be true.  Once the pastor appeared probabaly about an hour and a half late, due to the busy nature of the border first thing i the morning, we were taken as requested to the two sites where building work may be required.  it was Crawford’s job to accurately measure up the project.  One piece of land, more rural in aspect on the perifery of the city, is bare with no buildings on it.  It is hoped that this will become partly a sports ground and partly a skills centre for those who have not had the kind of education that would allow them to follow a more academic career, and to help udult educations and returners to access the kind of skills that will benefit them in the future.  The second site which already has a building on it will be converted and extended into a school for about 300 primary children from very poor backgrounds.  Crawford maticulously measured this and looked over the present partially built construction and listened in to the discussions on its purpose in order that he can faithfuly make drawings on how it might all look in the end.  It is likely that this building will be multi-purpose, used as a school during the week and for church and community activities in the evenings and weekends.

The remainder of the day was much looser in purpose.   We had hoped to visit the free work zone, a govertnment inspired area giving preference to the poor which I need to ask a lot more questions on before I uderstand it all.  We were refused entry to this; the official line being that the workers were leaving for lunch, however I understand that the officials are unhappy about visitors ‘spying’ on what goes on there?  Refusal to enter meant that we needed to find another activity for the afternoon.   The pastor agreed to let us visit some of the shanty homes ajacent to his church where some of the church members stay.  This was a sobering experience.  The streets were cramped and busy with un-schooled kids running up and down, with mothers preparing food or doing washing in very unsanitary conditions.  We were invited in to numerous homes with dimesions about 3 metres by 3 metres made of pices of rescued timber with more up-market ones having iron sheets for a roof.   The interiours were cramped to say the least.  Almost all of the floor areas were taken up by various forms of bedding for the large family to sleep in.   There was barely room for us to stand and when one did stand the headroom was limited too.  The families had done their best to interior design with bits of fabric strung round the walls an ceilings to magke the insides of these little homes more pleasant.  Pastor Rolex asked us to pray for each home after the mother had given us some particular area of need to pray for.  In two adjacent homes there was a particularly harrowing story to tell for which they asked prayer.  These fragile homes and insecure families were being threatened with death from their neighbours who wanted their tiny patch of land.  They had been asked to sell to them and when they refused the neighbours threatened them with guns and leave Voodoo parifinalia around their homes to scare them every day.  To us this may seem silly and irrelevant, however for them, living in a Voodoo culture is something that is generally feared.  We prayed for each family and moved on passing out sweets to the kids as we did so, almost causing a riot in the narrow streets.

Soon it was time to cross the border again back to the relative sanity and prosperity of Dajabon.  It is incredible how simple it is for us to extracate ourselves from the poverty and retreat to a safe and wholly more acceptable place than those we had left behind, relegated to their fearful, insecure but hardworking life of abject poverty.  For the last 25 years I have been visiting needy communities around the world, particularly in East Africa; and Haiti is just Africa on another continent far, far away; but I hope I never forget these lovely people who greeted us with a kiss and a warm welcome into their meagre little homes.  It is with a huge lump in my throat that I write about them and it is for people like these that Jesus died and that Mission International obeys his call to “GO”!  It seemed unfair for us to visit the Cafe Beller again for dinner,  No hard graft or long hours of preparation for us before a well made wholsome meal was served to us.  Soon it was time for Pastor Rolex and Izarak his collegue to get back across the border to Haiti for the night.  it is always difficult to process the things seen and heard on such missions.  To forget would be a sin and so our only option is to try to offer whatever help we can so that in some way someone will benefit from out answering God’s call.