As I lie on my bed trying to remain awake for just a little longer, it is clear that in Africa there is never silence, never nothing going on. Noise surrounds me; whether it is the continual ‘breeping’ of the crickets in the near distance, the thumping and twanging of music in a club establishment in the middle distance or the screeching of the massive truck horns declaring their presence and warning people and other vehicles to ‘make way’, and the droning of their engines as they slow down and speed up negotiating the random traffic and the speed bumps which appear every half mile or so. The barking and howling of numerous dogs; the wall of sound goes on into infinity…this place never seems to rest.

Once sleep overtakes me and I drift off, it will be noise of a different kind that will awake me in the morning. Whether it will be the wail of the Imam on the minaret or the bells and singing of the Catholic church in whose guest house I am staying for the next few days, or whether it be the baying of animals from donkeys and goats to large herds of cattle making their way at first light to pasture or the infernal cockerels who don’t know when to give up, I will be awakened of that there is no doubt. The noise will continue all through the day. The perpetual need to be active (sometimes in doing nothing) seems to challenge everyone. Shouting of market traders, crying of infants, giggling of children, the noise goes on. The car in which we are being carried has radio too, which is turned to excruciating levels as we thump up and down muddy potholed rods, its waves trying to cover up the creaking and squeaking of well worn springs and shock absorbers. 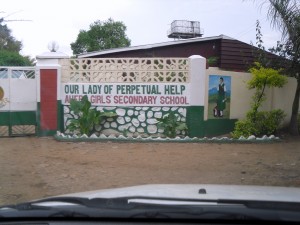 It has been just over a year since I was here with a team from Menzieshill High School in Dundee. The area hasn’t changed all that much except for the main access road which is now in good condition. Any road of the main thoroughfare remains bumpy, potholed and water filled, certainly at this time of the year. I am advised we will be travelling on one of the side roads tomorrow; to visit Kandaria where efforts will be made to deal with a house which has been in a poor state of repair for some time. We have purchased iron sheets and nails, some timber is yet to be bought and it all has to be transported on roads which resemble a swamp in what is now the rainy season. Progress must be made however since the widow whose house we will be working on is looking after her grand children after both mother and father have been lost in tragic circumstances. I suspect we will make it to ‘the bridge’ (for those who know the area),a part built concrete structure which was supposed to form part of s new road from Ahero but due to corruption at high levels, is now in a state which is unlikely ever to be made right. We will walk the rest and will doubtless receive a warm welcome by staff, pupils and local people thankful for whatever efforts have been made to help them in recent years.

Will I be able to sleep, I think so. A 6 hour journey from Narok and an hour or so remonstrating with the ‘flying teeth’ will see me out I suspect.